Can someone better explain the machine for me? like I do not understand the last part where it says from points resets and from xp resets

is there a way to gain passive mana?

How the hell I can get Mana?

once you unlock the next currency, you'll be able to automatically generate mana using The Machine

when the spell time reach 1000, itonly show up on when the number is whole

Not sure this is the intended behaviour but whenever I reset a skill tree (i.e. Energy) it resets all the previous trees as well (in this case, points and xp)

The most game ever created. Honestly brilliant. I mean this sincerely. 100% chef kiss performance art. I mean this SINCERELY. Thank you for creating and sharing this outrageous gem.

me here jsut wondering: how in the HOLY f... do people beat this in an hour or under?

I am having this run in the background as buying any next upgrade is only possible after like an hour or so of running. but still, getting to the space trree al,ready took forever and I have no idea how to even get the last tree.
like the next one takes 1000 space and after having all stuff running and autoupgrading since forever, prestiging would only give me like 17 space.

so how the fck do people beat this in under an hour?
there literally cant be any way to do this, in the very beginning the manual clicking parts take a bit of time but after that the game basically auto runs for the msot part (except for buying some right hand side upgrades after now and then).

how does one beat this so fast?

I sure am playing this causally, basically running it in th background in a separate window, but it already runs for more than 24 hours and I havent remotel the amount of space needed for the final tree.

the fact that basically time and space both (and mana?) are ressources that get introduced after having bought a new tree but there actually then is no option to buy to automine it makes this really hard.

like, you literally had to reset many times to grind together those 1000 time for example.
after having bought the next tree, we finally get some indirect automine option for time.

so you always first have to fgrind together 100 by hand and with your blood before you in fact get the next currency and the current one might or might not get a mine upgrade to get.

No way in hell did people all those cycles of repeated rebuild to grind together 1k of a ressource and then doing the same for the next ressource, with stuff obviously taking longer the more trrees need rebuilt.
and all that in 1, 2 or 3 hours.

1. the game will not run if you have another tab active or your computer is asleep

Have they added enhancers yet?

some better wording for the machine levels would be great as I have no idea what is converted into whgat, only obvious thing is that everything there costs energy per sec.

this one is pretty fun! good work, I really had a great time playing it.

make sure you export and save your game file. I can't seem to load the game anymore because of some browser incompat even though there's not.

kinda confused how energy is generating without the 10% perk

It just me or this upgrade tree looking kinda SUS 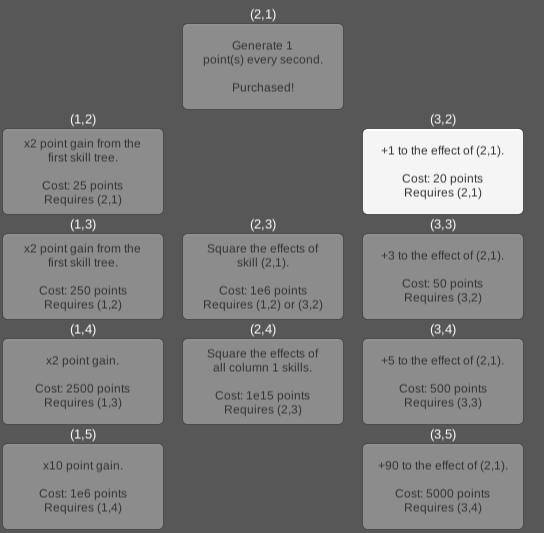 I had fun to the end.

how do I get mana

how do I get mana gain

I also found a bug where the hard reset fails to work properly and the buff of endgame magic stick around and so do the generators...

Finished the game in 2+ hours.

Dilations (and its upgrades) aren't that necessary since some other upgrades are powerful enough to lead to endgame.

do you know how to get man

So I made prestige a reward for prestiging

Dilations was completely unnecessary, I never even had to look at them

Very cool game, takes a long time in the first 4 tiers, but the last 2 go by very quickly. It took me 11 hours, but I was AFK most of the time. The dilation is confusing, there are no upgrades for it. The game is relatively new, so I understand if there are more updates coming.

Be sure to make an account and sign in before playing; this makes Save and Load work and you won't have to restart (like I'm doing) (because the game is worth starting over)!

Nevermind, that doesn't work either. Trying another browser, wish me luck!

Other than the Save/Load problems, loving the game here.

Dude this is really cool! I hope you flesh it out some more and maybe stretch it out a bit. But the core gameplay is super satisfying. Good job.

Really fun little idle game! Took about 2 hours for me to beat it. The 5th and 6th tiers seemed to only need maybe 10 minutes of time to do (most of that time is in 5th as well) so my only thing I'd say I want to see changed would maybe be some balance tweaks to either make that part longer but it was definitely a night well spent!

Gets extremely laggy around the 4th or 5th layer, to the point where switching pages makes firefox bitch about a script bogging down the browser.  Tried importing my save to chrome but it doesn't seem to work.

Also I never managed to get dilation to do anything, no clue what counts as a completed run.

I'd like if Energy/s counted what's being spent on the machine, sometimes it's hard to tell how many digits something is while it's rapidly changing, though once you reach the scientific notation limit I suppose it wouldn't matter, but around the 100000 stage it's a bit difficult, or if the numbers of total and per second were in a set spot it wouldn't keep moving around as much

Can you label each button with the (#,#) please? I keep reading 2,1 as second row and first column instead of second column and first row etc

It's not very clear until you get it.

no way this exists in the metaverse

It's most addictive fast idle from Crank time for me.

W/o lore and graphics but addictive!

4 hours 35 minutes to completion.   Top 10 % in idle games. Scaled to last longer and it could rate even higher.

There are a lot of idle games you haven't tried. While this does rank fairly high, maybe top 25% or top 20%, it's insulting to a lot of other creators who have worked harder, made better, and made lots of content to have this game that has no graphics besides white buttons, gray tabs, and a gray background, as well as only 6 tabs total and 2 hours of playtime max, be higher than much more complex, longer, and overall significantly better content.

One example is A Dark Room. While it is simple and only has text graphics, it has a story to go with it, and doesn't just have the same boring stuff for the entire game. You can change the color of the background, if you want. You can embark on adventures to get more materials. There's no basic prestige systems, nothing's actually that confusing, and it has more quality content than this.

Another example is The Prestige Tree. Its entire point is to have the user prestige, upgrade, prestige more, maybe upgrade some more, and then unlock a new way to prestige. I think this game might've been based off of it, but it's not very clear because of these basic graphics vs the colorful graphics in Prestige Tree. Like an upgrade tree in most RPGs, Prestige Tree's UI eventually forms a tree-ish shape after you unlock a few nodes (different ways to prestige and make more progress). Also, most nodes unlock new playstyles to go along with them, like bars to Balance, Magic power to buff other nodes, and more! There are challenges called Hindrances, which are ways to upgrade how many Points you get, as well as upgrade other nodes. Another feature is that you can use buildings in some nodes, which also buff other nodes. Sometimes these buildings can even buff themselves, like the Quinary Space Building, which adds 2 levels to all previous buildings (the Primary, Secondary, Tertiary, and Quadrinary Space Buildings). There's also an achievement system; you'll fill them out relatively easily as you go along your journey to complete the game (get e3.140e16 points). Some achievements are just there to show, but some achievements will actually help you and buff the various nodes you've unlocked. For example, in the early game, you'll only have Points and Prestige points. Points automatically generate when you buy the first Prestige upgrade, but Prestige points require you to sacrifice Points. Prestige points, however, are gained very slowly. However, there is an achievement in the early game called 'Prestige All The Way' that lets you get Prestige points 10% faster when you get all 3 upgrades! Another example is 'Prestige^3', an achievement that lets you unlock 3 more Prestige upgrades when you reach 1e45 Prestige points (by now, you've unlocked the next 2 nodes, Boosters and Generators, which will help a LOT). Overall, this game is extremely fun and has significantly better content than this.

You've heard of Antimatter Dimensions. I'm not explaining it to you.

There are many more games that I could've explained to you here, but if I go any farther I'm probably gonna hit a limit (why did I explain Prestige Tree so much?) anyways, have a good time rediscovering the top 10%, I wish you luck!

Would benefit much from full screen because of small text.

Thank you. Much better now.

The gap from 10xp to 100xp is pretty intensive on manual clicks.